‘The Chymical Philosopher, instructed by Hippocrates, takes these Seeds thus brought by nature to Maturity, and in them considers those Two (Salts) the Organs of Nature, viz. Fire and Water; and by Art, he urges them to action, by melting the Salts according to Natures Law, as Alchymy teaches, and then a new thing is produced, which was not before…’

The prevalence of the image of Hippocrates in titlepage illustrations of medical works in the Worth Library reflects the changing attitude to Hippocrates in early modern medical circles. As the sixteenth and seventeenth centuries progressed more and more emphasis was put on the empiricism of Hippocrates by writers such as Paracelsus (1493-1541), and Jean Baptiste van Helmont (1577-1644). Paracelsians were among the first to appropriate the ancient Hippocrates as a supporter of their chymical philosophy and Worth had a copy of one of the most important books on the subject: Petrus Severinus’ Idea Medicinae (Erfurt, 1616). As Jole Shackelford (2002) argues, Severinus’ text, which was initially published in 1571, was among the first to bring ‘Hippocratic theory into agreement with Paracelsian doctrine’. Severinus (1542-1602), a Danish physician, was writing at just the period when the Hippocratic corpus was being reassessed by early modern physicians. Hippocrates represented a propaganda opportunity for paracelsians, so often castigated by their galenical colleagues as being purveyors of ‘innovation’. By re-presenting the ancient and lauded Hippocrates as a chymical fore-runner, Severinus sought validation for the paracelsian project. As he argued in chapter VIII of the book: ‘These theories are Paracelsian, they are not inconsistent with Christian religion, and they are close to the decrees of the Platonists. But if they have been supported by the authority of Hippocrates, who can accuse them of novelty?’*

The ‘chemical philosophy’ is itself a contentious term: like the term chymistry it might mean different things to different people. Its chief exponents, Paracelsus in the sixteenth century and van Helmont in the seventeenth century, each emphasised the central importance of chemistry, but in different ways. As Clericuzio argues (1993), the influence of Paracelsus on van Helmont was mediated via Severinus. In turn van Helmont would remold the concept and his works would spread his version of the ‘chemical philosophy’ across western Europe. In England, Helmontian chemistry became popular in the middle of the seventeenth century, particularly among the members of the Hartlib circle. It was in this milieu that Boyle became acquainted with it. Clericuzio (1993) reminds us that Robert Boyle may have moved away from Helmontian chemistry after publishing The Sceptical Chymist but his early work demonstrates that he was well aware with the theories of van Helmont.

Petrus Severinus’ linking of Hippocrates and the chemical philosophy was taken up by Otto Tachenius (d. ca. 1670) in the preface of his famous Hippocrates chimicus, a copy of which may be found in the Worth Library. The very title of Tachenius’ text links Hippocrates to the helmontian chymical philosophy and in his preface to the reader Tachenius was eager to stress that ‘Hippocratical Chymists do not endeavour to produce new things, but to recall from Oblivion, Things approved by the Ancients’. Far from being a conflict between galenists and exponents of the chymical philosophy, Tachenius was adamant that ancient medicine had been one cohesive whole, encompassing both galenical concerns and chymical preoccupations. 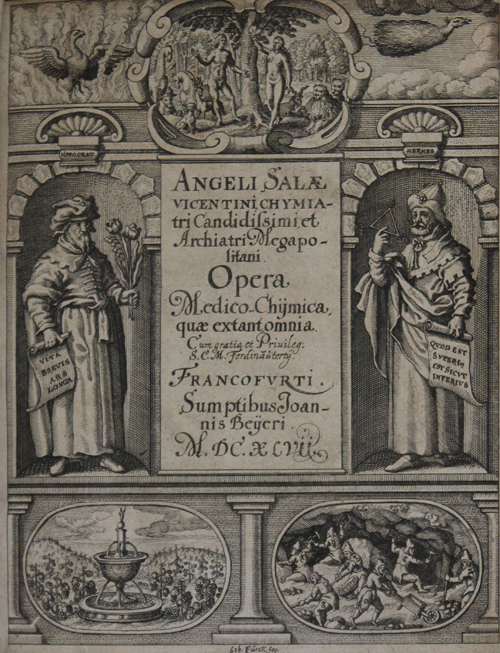 The titlepage of Worth’s copy of Angelo Sala’s Opera medico-chymia (Frankfurt, 1647) shows us that this chymical rehabilitation of Hippocrates was a Europe-wide phenomenon. Sala’s work was very much in the mainstream of early modern European medical thought and presents the reader with the practical applications of the chymical philosophy: a plethora of remedies which fall neatly into Worth’s extensive collection of texts on materia medica. Worth’s many pharmacopeias are, of course, intimately linked to his chymical collections but as his pharmaceutical collection is so extensive, it will be the subject of a later online exhibition.

Worth seems to have been particularly interested in the works of Angelo Sala (1576-1637): he had Sala’s Tractatus duo: de variis tum chymicorum, tum Galenistarum erroribus, in praeparation medicinali commissis (Frankfurt, 1649) and not one but two copies of Sala’s collected works:  the first edition of the Opera medico-chymia, printed at Frankfurt in 1647, and the second edition, printed at Rouen three years later. This compilation brought together Sala’s earlier works, including his Saccharologia (on sugars) and Tartarologia (on salts). As Gelman (1994) argues, the influence of Paracelsus is clearly seen in the latter text, with Sala going beyond Paracelsus by analysing the nature of salt. The analysis of salt proved to be an enduring theme as the work of Johann Heinrich Cohausen (1665-1750) demonstrate

Clericuzio, Antonio (1993), ‘From van Helmont to Boyle. A Study of the Transmission of Helmontian Chemical and Medical Theories in Seventeenth-Century England’, The British Journal for the History of Science 26, no. 3, 303-34.

Simon, Jonathan (????), ‘Chemisty and Pharmacy in the Eighteenth Century; Lessons from and Limits to a Disciplinary Approach’, 6th Internaional Conference on the History of Chemistry, 347-57. Text available online at: http://www.euchems.eu/fileadmin/user_upload/binaries/41_Simon_tcm23-139388.pdf

Tachenius, Otto (1671), Hippocrates chimicus (Leiden). Quotations are from the English translation of 1677.